So what do people say when you ask what makes them feel safe? I asked that question here Tuesday and the answers were great:

A person named Joan spoke of walking briskly by the seawall on a foggy morning and hearing the foghorn. Also the sound of rain beating on the windows at night. Times like these she says she feels “safe and at one with nature.”

The first time she spoke of morning coffee and gazing at the flowers in the garden window. That and brushing her dog Angel, and “that ridiculous fluff of a tail.” (I love that last part.)

Another person named Michael called up the memory of seeing Isaac Asimov being interviewed long ago on The Tonight Show. To Carson’s question about his personal vision of the future, Asimov replied: “I see the immediate future, the short term, as very dark indeed. But long term, I think the future of humanity is glorious. Unimaginably glorious. Provided we can survive the next century or so.” Consequently, Michael goes on,  he now feels he doesn’t have to contend with the same uncertainty that the madness around us stirs up. ‘It’s not that I don’t feel fear or sadness or anger, just that I don’t have that underlying ‘what the Hell is happening?’ anxiety to compound it.” What a gift to have such faith! (You can see more of Michael’ s comment on this page.)

And a  third person named Morgan, writing her reply in an email to me, spoke about the second go-round of a course on Mindfulness that she is taking. She said that for her the absence of anxiety was enough to make her feel safe.

I sure get that. When I first wake up in the morning anxiety floods all through my body, I think because I began forming a habit of overwork the summer I was 14  I have still not been entirely able to put down,  even all these years later.

But lately I have begun the practice of lying on my back with my head hanging off the edge of my bed, as per my chiropractor’s orders. In this wonderful batlike pose I can look out the window at what the rising sun is doing to the trees across the street. I can see the clouds. I can watch the planes coming in to  land at Logan Airport eight miles to the east. And best of all, I can see the birds.

These birds rise and swoop, rise and swoop and they lift anxiety from me every time I see them do it. ‘It’s a new day,’ I tell myself then, ‘and I’m waking in a world whose sun rose with no help from me at all.’

Then I begin to feel calm. Calm and safe too, in a world not of my making.

I often wish I had a dog with a big fluffy tail like the sweet drooly Golden we had as children but until I can get one, or walk again along a beach, or hear rain on a roof, while I await that unimaginably glorious future Mr. Asimov saw so clearly, this will have been enough. This will have been more than enough. 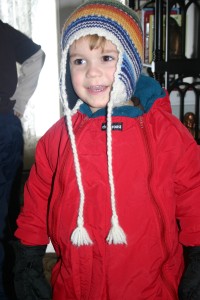 I said I would post a picture of the two-year-old grandson who told me, “Don’t worry! I’ve got you!” as I was carrying him down a set of icy stone steps. (See Monday’s post here.)

That remark held so much within it, how could I fail to remember it always?

It’s not that a little child like that was trying to look out for me, this giant adult who was, after all, carrying him bodily through space.

It’s more the metaphor of it; the idea, subtly suggested, that although we can never save ourselves from harm or elude fates as grim as the ones that have befallen or could have befallen people in Minnesota, Cleveland and Boston, we CAN save others. We can.

All of us. And we do it all the time.

But how did this little child know that? I think it must have been the wisdom of God himself shining through him.

Maybe what you need is this soft focus you see in little David here, in this picture take two years after our halting journey down those icy steps. It’s the softer focus that lets us see not just the things that are right before us, but the things a little farther off, and hidden almost from our sight.

moving and alive at the edge of our vison. 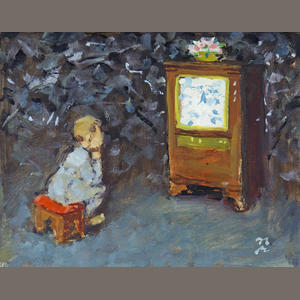 All this talk in the media about feeling safe enough –  even my own talk here yesterday on the Huffington Post – has me wondering: what do most of us do to feel safe in a day-today way?

I don’t mean what do we overtly do, like put on a hazmat suit or never cross a bridge. I mean what we do to feel safe inside, the way we felt when we were little kids in overalls sitting on the floor in front of Captain Kangaroo, or watching dust motes circle lazily in the empty dining room when the sun painted the whole room gold?

If I were still a high school English teacher and you were my students, I’d make you all sit on the floor in a circle and have you make a quick list right now, of three things that make you feel safe in this cozy old way.

What would you put on it? I’ll mull this over today, and see what I myself can come up with by morning. 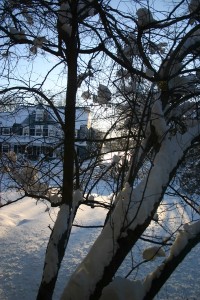 t now seems a world away from this blooming time, that winter’s day when I was trying to carry my three-year-old grandson down the set of stone steps that lead from our driveway. This is a picture I took that morning from our kitchen window.

“We just need to be a little careful here,” I said to him, knowing well that to descend any steps is to execute many carefully calibrated movements that amount to a controlled fall.

And so I hesitated at the top.

“Are you OK, TT?” the little boy asked. He calls me TT

“Oh yes!” I said as cheerily as I could. “I just want to good and careful!’

He gathered the fabric of my jacket into his small fist then and uttered a sentence I will never forget.

And that is one story.

Another story unfolded during a flight I recently took on a plane holding just 67 people, as I heard the flight attendant report to the people at the gate.

Sixty- seven souls, as they used to say once.

A near-full plane with only 67 passengers is a small plane by most standards, its cabin so cozy I could hear everything that that man five rows in front of me was saying to this flight attendant.

“So this is First Class!” he began, and that got my attention because it’s just what I was thinking: I too was in First Class for the first time, because the airline put me here for no extra money.

I felt like a sort of impostor, I’ll admit. I felt a little uncomfortable.

Maybe the man felt uncomfortable too, I thought, because his voice had a strange constricted quality, which the flight attendant had to lean in close to hear.

“What about this wind shear you’re always hearing about?” I heard him ask, and you don’t have to say that phrase twice to get my attention, wind shear being that sudden downdraft of air that can pull a plane right out of the sky; that did pull a plane out of the sky recently, causing it to belly-flop into the sea while attempting to land at an airfield in Bali.

Time was, I saw commercial flight as a tame and snoozy thing compared to the space flights we were all reading about back then.

It was, in my mind, like a ride on a Ferris wheel, a sort of sublime lifting-up where you got the chance to sit back and view the whole park.

I don’t feel that way about air travel now – and, clearly, this man didn’t either.

“Never mind wind shear, what about gravity?” I heard him say in an even tighter voice. “How can planes NOT get sucked down out of the sky every day?”

It was then that I realized: This was the man’s very first airplane flight –which is why the flight attendant had put him up front near her.

She had put him there to look after him.

“It’s OK,” she intoned softly. “It’s ohhh-kay” she repeated, her hand on his shoulder.

“I’ve got you,” she said, and the phrase took me right back to that winter day and the fear I had at the top of those icy steps, with my little grandchild in my arms.

We are all holding one another in this life. We are all keeping each other safe; and we do have the power to do that, as we are taught again and again in this life.