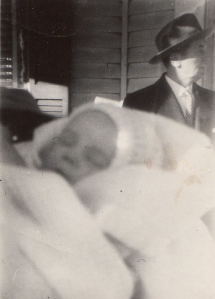 I hope everyone enjoyed the day yesterday. I know I did. I spent it as I spend all days, with the father of my children who I fell for at the tender age of 19 when I saw how his story matched my own, both of us fatherless, both accustomed to a life where we were special to no one in the great world, looked on with special favor by no one.

That part was OK. Most people are in this position.

David’s dad contracted stomach cancer when David was ten. Mine…well, mine had his own problems, which I have said a little about here. He came to see me only once on the occasion of my baptism and by a stroke of luck somebody took our picture. I’m the sleeping one in the arms of my Aunt Julia. He’s the sad-looking one in the hat, face turned away.

The picture was taken at my grandfather’s house where Mom went to live as after he left us. He stayed only an hour as she told me 20 years later. He didn’t speak to Mom and he didn’t so much as look at me. He had left us eight months before and felt ashamed I imagine.

He did his best in life, of that I am sure.

And this is David’s doomed young Dad beneath here, when he was in high school. His first-born son, David’s big brother Toby, looks quite a bit like him as you can see.

But lacking a dad doesn’t mean you can’t enjoy that third Sunday in June.

Nor does it mean you can’t be a great dad yourself, as my kids’ dad is and has been since our very first child first drew breath in this world.

This is the man, in summer once by a lake.

Here’s to all fathering then, whatever form it may take!

I woke yesterday to realize that all the sorrow and self-pity that used to enshroud me around the subject of fathers had just suddenly …lifted, I think because just a few days ago I remembered a  conversation I had 20 years ago with the then-pastor of Pilgrim Church in the Upham’s Corner section of Boston. This man of the cloth was telling me that a curious ‘gift of vision’ had recently arisen in him, as perplexing to him as it was to those around him. I asked him how it manifested itself.

“Well for example right now I see that there is a man standing behind you.”

The little hairs on my arms stood up.

“I know who that is.” I said. “I met him only once, when I was 19, and we spent an hour together in the bar of the DuPont Hotel in Wilmington Delaware.

“He was your father?” said this man, who knew nothing whatever about me and my life story.

“He looks so sad,” he said glancing over my shoulder.

“Well, he drank. He left us,” I said, feeling the old hard knot of anger for all my mother suffered as a woman alone in that era of the famously intact family

“That being the case, maybe leaving was the kindest thing he could think to do for you all.”

“Maybe,” I said but I didn’t believe it.

But now with the return to my mind of this long-buried conversation I’m seeing things in a new, more forgiving light.

Plus you know I look just like the man: Under the dye job, my colorist tells me my hair is now almost all white. God knows it’s really wavy. And just 16 weeks ago Nature served up to our entirely brown-eyed family a baby with eyes that same bright-blue as Hap Sheehy once had.

‘Time to issue the man a welcome, Terry,’ is what I thought waking up to Fathers Day yesterday.

So welcome, my poor sad terrified dad. Pull up a chair and we’ll all scootch over. It isn’t hard at all to make a circle bigger. 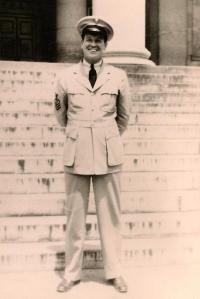 Some six or eight years ago now we had our best pals over for Sunday dinner who arrived with seven young children. The littlest, just three years old, approached me in the kitchen as the parents drank their drinks and talked their grownup talk.

Did I have any toys anywhere? she wanted to know.  I dropped everything and took her to the a room upstairs where still slept the wooden blocks and the Fisher Price cash register and the Lego people with their funny round heads. The other six were hot on our heels and soon we were ringing up sales and arranging tiny schoolrooms and building beds for more stuffed animals than you could shake a stick at.

We’d been playing with them for 10 or 15 minutes, when this littlest one, this three-year-old, nodded her head toward the stairs leading back to the kitchen and casually asked, as if I too were a child of three, “Which one is YOUR daddy?”

She meant, “Which one looks after YOU, when you really need what a father can give?“

I didn’t even hesitate.  “The one with the white hair,” I said.

We both smiled then, she for all the fun we were having, and I, fatherless from birth, for what she had given me: the fresh realization that a love begun as late as adulthood yet can heal the oldest wounds.

And so Happy Fathers Day to all and a  belated blessing on the blue-eyed man who left before I came, wherever he may be today:

and more blessings yet on this brown-eyed man with the once-dark hair who has stayed and stayed, and fathered quite a few people in his strong and quiet helping way.

The man we’re celebrating this Fathers Day had just one suit the year this picture was taken. It was bought for his middle school graduation. That was fine with him. We’ve been married 40 years today and in all that time I have never heard him utter a single boast. I remember before his 25th college reunion he didn’t want to fill out the survey. “Look I’ll read the questions and write down your responses,” I said, and took out my pen.

He doesn’t care if the world thinks him successful. It just doesn’t matter to him. I remember asking him that day how many suits he had now. “One,” he said. “One that I can wear.”

The year our son was going into 8th grade he spent all eight weeks at a summer camp in the Berkshires.  On that first Visiting Day, most of the other campers had parents with fancy cars. At one point we found ourselves next to the basketball court where a lone father in fancy shoes and a Versace shirt was shooting baskets. David had on shorts and his Dr. Seuss T-shirt with Hop on Pop stenciled on the front.  I knew he wanted to shoot with our son, but was holding back, not wishing to interrupt this well-dressed dad. “Go on out there!” I said under my breath. “This guy’s just some cardiologist! ”

He laughed. He knew what I meant. I meant, “Some rich guy in fancy clothes? Some rich guy is no match for a man with just one suit.”

Happy Fathers Day Old Dave! And Happy 40 Years With TT who loves you even more now than she did when she snapped this picture.